Skip to content
You are here
Home > Hiking > Who Wants to Take a Walk on The Appalachian Trail?

Now the Appalachian Trail (AT) may seem like an unusual travel destination to some, but the trail has a mystique that calls to thousands each year. The 75-year-old trail, a 2189 mile footpath along the Appalachian Mountains in the Eastern U.S. has been the subject of many books as well as conversations among hikers for generations. It takes careful planning and five to seven months to complete the hike. Since the shelters actually on the trail are limited, one needs to carry both shelter and supplies as well as enough food to get to the next resupply location, which can sometimes be several days. The trail does go near and even through some towns where hikers can resupply, shower and maybe even stay at a hotel or hostel for a night or two, but through-hikers need to expect to spend most nights on the trail. 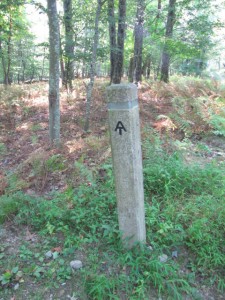 In 1968 the AT became the first National Scenic Trail; it was added to the National Park system in the 1970s, when the National Trails System Act called for state and federal government to purchase corridors surrounding the AT footpath; the last stretch of land was acquired in 2014. 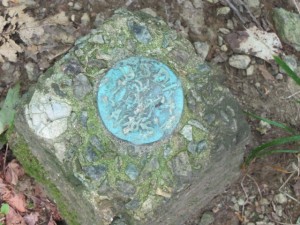 There are a number of ways to hike the AT, which has seen several variations of trail markers over the years; older versions can still be found on the trail. Most people enjoy the beauty of the AT on day hikes and for many, this is enough, but serious hikers may want to tackle all 2189 miles. Few people have the luxury of being able to spend half of a year without obligations (not to mention the cost: approximately $3,000 plus gear, according to the Appalachian Mountain Club), so many hike the trail in sections. This can be a number of day hikes, or multi-day backpacking trips. Those who are really serious do decide to hike the entire trail, either from end to end or in a “flip-flop hike.” Most who start do not complete the full hike, it is estimated that only about a third of those who start a through-hike complete it.

Since much of the trail’s geography takes one through states that experience (sometimes harsh) winters, through-hikers have a window during which they need to start in order to complete the full hike. Most travel from Georgia, and today many have already begun their trek. (March 1 through April 15 are the most popular dates to start from Georgia.) There are some who start in Maine but, due to the snow, can’t start until May or June. This section of the trail is also said to be the most difficult, and most experts suggest building up to that level.

Flip-flop through-hiking is also an option. The ATC gives several plans to do this, which involves starting at a location somewhere on the trail, hiking one direction to the end, then returning to your starting point and completing the trail in the other direction. Although this is a bit non-traditional, there are good reasons to do this. Aside from the fact that certain mid points are easier hiking to start with (then progressing to more difficult terrain) there is also the fact that it reduces the crowds found at the traditional starting points.

Preparing for your hike 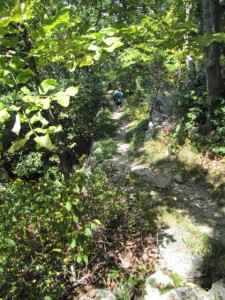 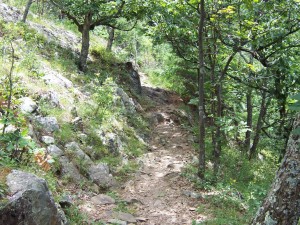 There are a number of websites and excellent books to help you determine what you need. Guide books and trail maps provide even more information. You might want to select a trail name, or wait and see what name feels right after a couple days out. Learn about or review Leave No Trace principles so that you minimize your impact on the outdoors and help keep it enjoyable for everyone.  Start hiking smaller distances to get in better shape, and get used to carrying a full pack. A hike this challenging is not something to just jump into unprepared. Make sure someone knows you are going and leave them a rough itinerary. (This is a good practice anytime you are traveling.) Know the regulations, for example on where you can camp and if cooking fires are permitted. Some sections of the trail go through state and national parks that require permits (you can get some of these in advance through the ATC website).

Planning the hike with a partner is a good idea. Besides having someone to share experiences with and encourage you, it is also safer. While the risks are minimal, the trail does go through wildlife habitat and run-ins with bears or snakes are possible. Much of the terrain is rocky, so there is a chance of injury. And, although the majority of people found on the trail are good people, as with anywhere else, there are some out there with evil intent.

Know that your personal mileage may vary. Trail sections are sometimes rerouted. Note: hiking the trail usually means hiking more than the trail. There are interesting side trails, sometimes leading to incredible overlooks which it would be a shame to miss. Leaving the trail for a trip into town also adds to your total distance.

The ATC now has a voluntary through-hike registration, which is free and includes a membership to the ATC and other perks. The idea behind the registration is to minimize the crowds at the early stretch of the trail. News about closures and other alerts can be found on the National Park Service website.

Although I would love to say that I think I could through-hike this trail, I am a realist and am fairly certain that I will never be in good enough shape to do this. So, instead, I have the almost as ambitious hope (not even a goal) to someday be able to say I have section-hiked all or at least most of it. Bill Bryson’s popular memoir A Walk in the Woods is an entertaining story of his journeys on the trail. It is largely his writings that made me realize that through-hiking is likely not for me.

The trail is beautiful and demanding. I have completed short sections of it in Virginia, North Carolina and Tennessee (the latter two states essentially at the same time as a portion of the trail straddles the border).  I have not as of yet backpacked on the trail, instead doing day hikes from a campsite.

The Virginia section goes through Shenandoah National Park and this is the state where I personally have logged the greatest number of miles on the trail (about 6). The trail also goes through Great Smoky Mountain National Park, which is where I hiked Tennessee and North Carolina. I had quite a bit of fun with this stretch, near Clingman’s Dome,hopping in NC, then TN and back again.

Most recently, I completed a stretch of about 3-4 miles of the trail (with side hikes, total of 10 miles) while camping at Lewis Mountain Campground in Shenandoah. We set up camp late in the day and the next morning I ventured out and happened to see the white blazes marking the trail that went right behind our tent! As luck would have it, the trail heading north went up to the Bearfence Rock Scramble and to a 360 degree overlook that I had read about just a few months before. The campground map indicated it was only about a mile, so it was an easy decision. It was mostly uphill and had several switchbacks to get to the overlook, but the view was well worth it. We ended up missing the scramble, as we followed a trail marker that led to the overlook instead. Total miles for this trip (there and back, plus the detour) was 3.6.

The next day we headed south on the trail, with our destination the ruins of the Episcopal Pocosin Mission, which dates back to 1902, about a mile off the trail, with total miles 5.7. The trail started downhill, and coming back I remember thinking that there was no end. I kept telling myself I would stop for a breather at the next plateau, but the trail seemed to just keep going up. This hike came in at 5.7 miles (again this is there and back, plus about 2 miles off the trail to the mission). 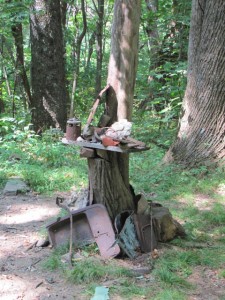 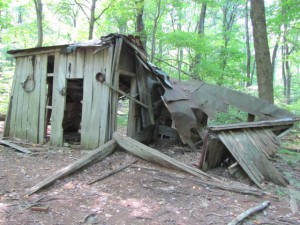 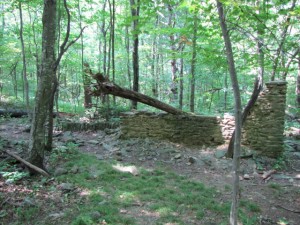 While perusing the ATC website this week, I discovered the 14 State Challenge, where the goal is to hike a section of the AT in each of the 14 states the AT goes through. And, there is no time limit to complete this! This is something I feel I can set as a goal. I also discovered the AT Hike100 Centennial Event, which is being run by the Appalachian National Scenic Trail this year in honor of the National Parks Service celebrating 100 years.  The challenge is to hike 100 miles between Jan 1 and Dec 31 2016, with at least one hike on the AT. This too is something I may be able to complete, since April is just starting. I have only 97 miles left to go!

A Multitude of Things to See and Do on the Chesapeake